Blade of the Immortal Wiki
Register
Don't have an account?
Sign In
Advertisement
in: Characters, Male characters, Secondary characters,
and 5 more

Kagimura Habaki (吐鉤群, Habaki Kagimura) is the leader of the Shogun's Banshu samurai, the Bangashira, and secret leader of the Mugai-ryū. He simultaneously invites the Ittō-ryū to become an official sword school while directing the Mugai-ryū against it. Kagimura also masterminded and took part in the massacre that occurred during a feast welcoming the Ittō-ryū into the Banshu. Abayama's comments imply that he is incredibly skilled with a sword, as evidenced by his attack on Manji in Trickster, volume 15. He first appears in Dark Shadows part 1.

Kagimura is a kind man who cared deeply for his family, despite the fact that he had hundreds of innocent men put to death by the hands of Burando. Kagimura's original plan was to find the secret of immortality in order to make the current Shogun an immortal. In the end, Kagimura expressed regret for not stopping the experiments once Burando concluded that only people who's blood matched Manji's could become Immortal because 250 fewer people would have died, and he didn't want to risk the Shogun's life for immortality.

Kagimura is first introduced as Magatsu is leaving the Itto-Ryu, at the same time Makoto is first shown. But he is not shown to be important until he is Introduced as the man backing the Mugai-Ryu from behind the scenes. While also making their enemy the Itto-Ryu an official dōjō.

Kagimura sends Giichi of the Mugai-Ryu to retrieve Manji for unknown reasons, and Giichi complies on the condition that he and Hyakurin will be released fro the group, therefore disbanding it entirely. Once he meets Manji he tests his immortality and confirms it's existence. A large group of Kagimura's men appears to knock Manji out, but after four of them are killed Habaki himself steps in. After Manji is out cold, Habaki brings him to an underground cell with the doctors Mouzen, and Burando who question Manjis immortality until Kagimura assures them by fatally cutting him multiple times. Kagimura gives the doctors fourteen days, seven each to unlock the secrets of immortality.

The Pursuit of Immortality[]

Their task is to make a death row inmate Dewanosuke, immortal in fourteen days. After Mouzen completely fails, Burando steps in, and succeeds in giving Dewanosuke regenerative abilities after a couple weeks, even with Manji plotting failed escape plans. Kagimura decides to test his immortality impatiently, and even though Manji, and Burando are against doing it so soon, Kagimura stabs Dewanosuke straight through the heart, and kills him. Angered at Burando as he is, Kagimura decides to give him more inmates, knowing that very few doctors have his skill and would be able to pick up where he left off. After countless failed experiments Kagimura puts Burando in a cell, and replaces him with another Doctor who isn't nearly as quick or neat as Burando was. Kagimura decides to take Burando back out of his cell, but he is a completely changed man who no longer values human life as he used to. Kagimura gives what look like hundreds of more inmates for Burando to test on, but Burando comes to the conclusion that only some blood, such as Dewanosuke's is compatible with Manji's. After a short while Kagimura recieved a letter from Burando with the Kanji for Success on it.

On his way to the prison a group of guards are quarreling with prison escapee's who claimed that they were going to be experimented on in an underground prison. The prisoners are brought to Kagimura, but he does not know what to do with them, and decides the guards should keep them until he comes back. Once Kagimura confronts Manji, and Rin in the prison he is distracted by Rin who lights him on fire with a pouch of gunpowder, Manji throws a Hairpin that Dewanosuke left him, straight into his eye. The hairpin was stored inside of Manji's mouth who gained a mild sickness over the time of the experimentation, and that was carried on to Kagimura through the pin. After a short while Kagimura is knocked out, and the underground prison begins to flood. Later on many more prison escapees are let out, along with the truth about what Kagimura has been doing with them up to this point. Kagimura is Sentanced to death in a short time, and decides with the time he has left he will use to strike down the Itto-ryu.

In order to destroy the Itto-ryu Kagimura introduces his reserved forces. Comprised of criminals, and others he taught since childhood. They went be the name Rokki-dan, and were split into six divisions hence the name. After one of the core members Haiyabou is killed in combat against Sukezane Baro, Kagimura reluctantly replaces him with his own daughter Ryo Soma who begged for it. Later on the rest of the Rokki-dan are introduced as Tarieshin Hasshu, Shinhei Doma, Inroku Ban, Shishiya Arashino, and Shozo Murasaki.

When the Itto-Ryu is banned from Edo, Kagimura predicted they will take port from Hitachi, and they tail the Itto-Ryu. Along the way Koji Kashin splits up from the rest of the Itto-ryu, and Inroku Ban volunteers to follow him. Unable to trust a criminal Ryo Soma volunteers to go as well, and Kagimura accepts and sends four other Hebigumi with them. Later when Kagimura gets word that only Ryo survived from pursuing Kashin, he has Tarieshin, Shishiya, and Shozo head to the shack that the Itto-Ryu is staying at, and convince them that Anotsu is dead, and come back. Later Kagimura learns that the mission went completely different than planned, and that Sosuke Abayama was killed by Giichi of the Mugai-Ryu, and that the other Itto-Ryu members were all killed by Shishiya, Tarieshin, and Shozo, the Latter of which also died to Kunimitsu Amon.

Seeing as they were near the Nakamino port, the Rokki-dan had a change of plans, and Habaki ordered them to kill everyone there in search for an Itto-ryu ship. When Tarieshin and Doma come back to him, after fighting Makie, a group of Government officials confronts Kagimura, who completely Manipulates them into believing that they received a government order to kill everyone without a blood seal because otherwise, they are Itto-Ryu. The Government officials pass by Makie and confirm she is Itto-Ryu, but they notice she has Tuberculosis, and while confused, they are all killed in an instant. Anotsu and Manji then show up, and Kagimura orders Shishiya to take down Manji, while he fights Anotsu, and Tarieshin, Shinhei, Mitake, and the Hebigumi fight Makie.

Kagimura, and Kagehisa start out by both dodging each and every one of eachothers attacks, and after a while, Kagimura realizes that Anotsu is going as close to the side of the pathway they are in, in order to avoid hitting the beams on the other side with his axe. Kagimura moves in when Anotsu begins to do this again, and ends up cutting the top of his ear off, along with the beam to the side, which falls down. From afar, Rin looks up and see's the pillars falling down on her, which she barely dodges, and didn't know what was happening up there until she saw Anotsu's axe fall down. Kagimura notes that without his axe, Anotsu's blows are not as powerful and that he can block them with his own sword, but he also notes that not he can die within the blink of an eye. After a while, the blood from Kagimura's forehead was starting to accumulate by his eye, and Anotsu taunted that he should wipe it with his left arm, realizing that Habaki was incapable of raising his left arm past his shoulder. When Habaki finally goes to wipe it with his right arm, Anotsu charges in and stabs him in his last remaining eye, but at the same time Kagimura cuts Anotsu's Little finger off, and both their blades are knocked to the floor. As Anotsu reached for his blade, Habaki kicked it off the edge of the cliff along with his own. Kagimura then rushed in and started to choke Anotsu who was momentarily distracted. Kagimura pushes him into the pillar just by the edge of the cliff and planned to strangle Anotsu to death until he is kicked in the side of the head. Anotsu, and Kagimura both go tumbling down the side of the cliff.

Kagimura is seen to be proficient with two standard Katana.

Kagimura is seen to have enormous Skill with the sword, as seen when he easily defeated Manji, and when he was giving a demonstration of Manji's immortality to the doctors who he ordered to uncover the secret of Immortality. 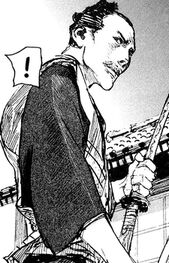 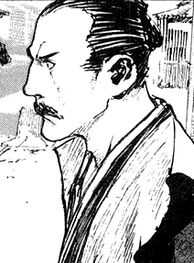 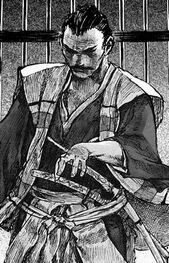 Habaki ready to draw his sword
Community content is available under CC-BY-SA unless otherwise noted.
Advertisement