Blade of the Immortal Wiki
Register
Don't have an account?
Sign In
Advertisement
in: Characters, Male characters, Samurai,
and 2 more

Sabato Kuroi (黒衣鯖人, Kuroi Sabato) was a member of the Itto-ryu in Blade of the Immortal.

Along with his skills with a sword, Kuroi has several quirks, like referencing Black Sabbath in his poetry. In addition, Kuroi is so obsessed with ageless beauty that he used taxidermy to preserve the heads of his female victims and stuffs them to preserve their beauty forever and sews them upon his shoulders. He did this with his wife and Rin's mother presumably just after beheading her father.

Founding of the Itto-ryu[]

Sabato is presumably the first member to join Itto-ryu, as he is around when Anotsu is a child. He is a skilled pupil under Anotsu Saburō, Anotsu Kagehisa's grandfather, and a master swordsman. When Kagehisa Anotsu was a child he helped him in the founding of Itto-Ryu.

When Anotsu and some of the other "core" Itto-ryu members invade Rin's father's Mutenichi-ryu Dojo, Kuroi is the one who ultimately kills Kurose, and O-Toki Asano. Somewhere along the two years before the start of the story of Blade of the Immortal, Sabato stuffs and mounts O-toki's head upon his shoulder.

Before Manji has agreed to become Rin's bodyguard, they hatch a plan to meet Kuroi, as he had sent love letters to Rin every night for the past two years. Kuroi easily defeats Manji when they fight, and as Rin attempts to help, Kuroi's cloak is torn away, revealing the stuffed heads of his wife and her mother on each of his shoulders. He tries to convince Rin to give up her own life so she can join her mother and himself in nirvana; his plan is to kill Rin, stuff her head, and attach it to his shoulder where his former wife's head now rests. However, Manji is able to kill him.

Kuroi is the first member of the Itto-ryu to be killed, and the two shuriken he uses which are called Karasu, or "The Crow" are taken temporarily by Manji.

Sabato Kuroi carries around two un-named Katana, and two Shuriken that he calls Karasu or "the Crow".

Even though Kuroi was extremely powerful, and easily defeated both Manji, and Rin in battle, he is one of the Itto-ryu members Manji fought before Magatsu, so he knew nothing of Manji's immortality, and completely under estimated him, which lead to his downfall.

Kuroi Sabato is inspired by the band Black Sabbath; Kuroi Sabato roughly translates into Black Sabbath from Japanese. Kuroi is a direct translation to the color black. Sabato when romanized, can be taken as "Sabbath." Black Sabbath is known to be one of Hiroaki Samura's favorite bands.

Kuroi, as he appears in the anime without his mask 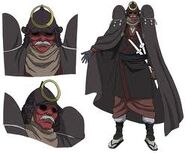 Kuroi in his anime colors.
Community content is available under CC-BY-SA unless otherwise noted.
Advertisement