Doma is introduced at the meeting between Rokki-dan along with the other main members, and later confronts Manji along with Tarieshin Hasshu, both mistaking Manji for Sukezane Baro, because of the similarity in facial scars. When they go in to attack Manji, Rin yells to him, and Shinhei concludes that they are facing not Baro, but Manji the "hundred man killer". The two cease their attack, and leave, but Manji complains that the hut he built with a single hand was burn, and that he deserves atleast an apology. Doma calls Manji lucky that the Rokki-dan is not after him, and that he could easily kill Rin at any second, then the two walk off. Later Doma, and another group of Rokki-dan tail Anotsu Kagehisa to a secluded spot in town, but Rin also chases him, and the two pretend to be Manji, and Rin while Kagehisa has the back of his head covered, and Doma thought that Anotsu got away, and leaves.

Hunt for the Itto-ryu[edit | edit source]

Doma is tasked with finding the whereabouts of Baro, and decides to visit his fiance, and get information out of her. When he gets to her place of work, he is told that Baro left her, and she had to become a prostitute in order to make a living, but a customer introduced her to drugs, and now she spends all of her money on Opium. When she was unwilling to talk about Baro, Doma knew something was up and decided to pretend to leave. When he left, Baro's Fiance rushed out the door, in order to tell Baro people are searching for him, but Doma was waiting for her, and decided to torture the information out of her, now knowing that she knew his whereabouts. In the end the girl bit her tongue off, and died.

When the Itto-ryu was finally forced out of Edo, the entire Rokki-dan followed, Doma included.

Shinhei uses a pair of Nunchaku as his weapon of choice. 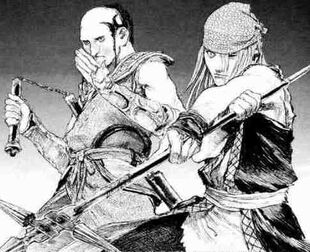 Shinhei Doma alongside Tarieshin Hasshu prepared to face Manji who they mistook to be Sukezane Baro
Add a photo to this gallery
Retrieved from "https://boti.fandom.com/wiki/Shinhei_Doma?oldid=5649"
Community content is available under CC-BY-SA unless otherwise noted.