Five years prior to the start of Blade of the Immortal, in the year 1777, Hasshu was a member of a ship, that got caught up in a storm in the bay of Shuruga. Hasshu went overboard, and was later washed up on the shores of Odawara. Tarieshin regretted not being able to go to authorities because of the language barrier, and he had to resort to stealing. One time he got caught, and beaten, then taken to the Authorities. Tarieshin was completely hopeless, and thought he was going to be excecuted within the week, untill a man named Leu saved him, as he too could speak German, and protected Hasshu. Leu paid the price of not being able to bargain in Japan again for a whole year, and decided he had to go back to his homeland. Hasshu, and Leu began to sail back to Germany, but along the way, Leu's crew had a mutiny, probably because they traveled all the way to Japan for nothing, and Tarieshin, and Leu were beaten up and thrown overboard. Hasshu's skull was knocked in resulting in the loss of his left eye, and he thought that he had to die. Hasshu layed all the blame for what happened on himself.

Tarieshin is introduced along with the other Rokki-dan members as one of the six Hanagumi. Later he, along with Shinhei Doma attack Manji along with a group of Hebigumi, thinking he's Sukezane Baro. Yet once Rin yells to Manji, Doma realizes that he is not the man they are looking for, and the two back off.

Later when the Itto-ryu is banned from Edo, Tarieshin and the rest of the Rokki-dan tail them. Far into the pursuit, the Rokki-dan stays at a secluded shack, and Tarieshin along with Shozo Murasaki, and Shishiya Arashino, come after them in the early morning. When Yatsushiba sees the group from afar on horseback, Shishiya cuts his head off, and they bring it to the other itto-ryu members. Their mission originally was to convince the Itto-ryu that their leader Kagehisa Anotsu, along with three of the four remaining "core" Itto-ryu members had been killed, Sosuke being the fourth. Every Itto-ryu member except Sosuke was convinced because Anotsu was a day behind their scheduled reunion. Sosuke called their bluff and said that either someone of the Rokki-dan had been killing the horses the Itto-ryu was reserved to ride. He also said that if Anotsu was truly dead, the Rokki-dan would have been let off the hook for their crimes, and would have no reason to be together anymore. When Sosuke challanges to take of Hasshu and the other two Rokki-dan alone, the other Itto-ryu members all quit so that they don't have to worry about the rule of one on one fighting. the three "strongest" of the Itto-ryu pin Sosuke down from behind and take him away, while Tarieshin Hasshu faced off against Kurehiro, and Katsumata, and the other Rokki-dan faced off against the rest of the Itto-ryu. Tarieshin fought Kurehiro first, who was fairly powerful, but Tarieshin landed a blow to his chest, and later decapitated him after telling him of his past, as Kurehiro was also German. When Katsumata rushed in to avenge kurehiro, Tarieshin decapitates him with the flick of his wrist, saying "Sorry, I don't understand Japanese".

Later when the Rokki-dan stay in Nakaminato port, all of the Hebigumi are overjoyed. While Tarieshin grows a depressed look on his face, because of bad memories, to which Shinhei Doma comments on. Kagimura orders all of the Rokki-dan as well as Mitake to kill everyone on board the ships, and they comply. While Shinhei Doma finds Makie on a ship, and is about to be killed, Hasshu come up from behind, and knocks her back. After he gets off because of his fear of ships developed five years prior. Tarieshin and Doma retreat to Habaki, while Anotsu, and Manji show up. Tarieshin, Doma, and Mitake are ordered to kill Makie, while Shishiya fights Manji, and Anotsu fights Kagimura. Three of the Hebigumi jump on Makie and stab her, but Doma tells Tarieshin, and Mitake to go at her even if she is half dead. Mitake realizes that she blocked all three of the Hebigumi's blades and yelled for Hasshu, and Doma to get back, which they barely managed to do, but as Mitake was back, and Doma was down, Makie jumped at Tarieshin and knocked him down. Makie then hurled herself towards Mitake who threw a boomerang around, but Makie kicked her feet up, hit the boomerang to the floor. After a while of fighting Makie goes in for the kill on Tarieshin, but Doma saves him, and he and Mitake proceed to swing towards Makie, who jumps above the attack, and stabs Doma in the shoulder. Tarieshin lunges his spear towards Makie, who dodges it and kicks him in the face. Mitake attempts to cut Makie's feet off, but she knocks his sword of his hand, and Mitake launches another one of his boomerang blades towards Makie who just kicks it back into his shoulder. Makie hits Doma in the side with her blade, and kicks him down. Tarieshin attempts to fight Makie again, but is pushed back, and Doma pulls out a custom pair of Nunchaku called Tien Nagi, and tells Mitake to leave the fight to he and Tarieshin for a while. Doma claims that he can surpress Makie in thirty seconds, and has Tarieshin keep the count. With the blades Doma is easily able to hold his own against Makie, unlike before. With this, Tarieshin too reveals the true form of his fighting style by spinning his five headed spear. Makie is just barely able to dodge Tarieshin's attacks, and when she is pushed into a wall, she attempts to dodge the next one, but Doma stops her. Makie slices Doma's let clean off, but he holds her down, and screams to Tarieshin to drive his spear into her. As Tarieshin is about to do just that, one of Mitake's boomerang daggers from before, that was thrown by Makie, hits him straight in the back of his neck, and knocks him to the floor. Doma who was holding Makie down, is surprised for just a split second, and then Makie stabs her blade into his bottom jaw, and proceeds to cut his head clean off. It is then revealed that Doma was the "Leu" that had helped him out seven years prior, and even though he knows Makie is coming to kill him next, he lets her while commenting on how interesting a country Japan was.

Doma is the only other character in blade of the Immortal that Hasshu had shown any form of respect for. Be it because he saved his life five years prior, or because they share the same nationality.

Hasshu is seen to use a spear like pole arm that is double sided.

Tarieshin is incredibly skilled with his spear as he can decapitate a man with just the flick of a wrist. Out of the seven Hanagumi in the Rokki-dan it is assumed that Tarieshin is the second strongest just behind Shishiya. 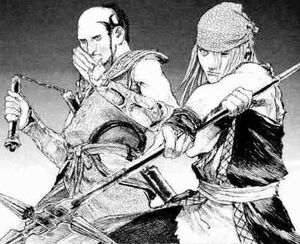 Hasshu ready to face off against Manji 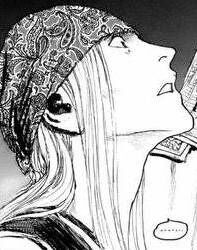 Tarieshin's reaction after Sosuke Abaya completely sees through their plan 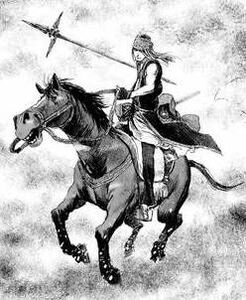 Tarieshin on horseback along with Murasaki, and Shishiya on the horse beside them.

Tarieshin just before he is killed.
Add a photo to this gallery
Retrieved from "https://boti.fandom.com/wiki/Tarieshin_Hasshu?oldid=6713"
Community content is available under CC-BY-SA unless otherwise noted.